Let us be honest the kick ass series is so bad ass. Comedy,action, and drama all in one superhero movie, need I say anymore. Go out ,buy the movie and the comics as fast as you can. All our favorite stars are back in this sequel, including Matthew Vaughn as director.

Kick Ass Two has everything the first film had, plus way more. Kick Ass Two, starts with KickAss and Hit girl training. Aaron Taylor Johnson and Chloe mortez reprises their roles as KickAss and Hit Girl , respectfully. She has been told by her new father ,Marcus, that she no longer be Hit Girl and needs to live a real life. Dave ends up finding a group a heroes that have formed their own Justice League of sorts. With misfit heroes such as Col. Stars and Stripes, DR. Gravity and Night Bitch. Col. Stars and Stripes is played by Jim Carey and he plays the former mafia hit-man who is a born again christian. He leads the group of misfits in trying to clean up the city. We see the relationship of Hit Girl and Kick Ass fleshed out so much in this film.

Hit Girl has a much bigger role this time though. She gets to deal with high school and everything that comes with it like boys,sleep overs and mean girls. She deals with them in only a way He dad, Big Daddy, Nick cage would approve of by giving them the shits and making them all throw up.

The film turns into an all out war between heroes versus villains led by Kick ass and the motherfucker, formally the red mist, respectfully. The mother fucker has compiled a group of deranged villains. One in particular is named Mother Russia, she is a bad mother, who can take on anyone who comes her way.He and his group of bad guys  completely destroy Kick Ass’s life. Without ruining anything. I will just say it does not all end well for him. Everything and everyone he loves is put to the test and we see Dave grow up a lot.

The film concludes with the war that has been building up between the two groups, and obviously sets up for another KickAss sequel.The end has a ton of action and killing, only a comic like Kick-ass can accomplish. 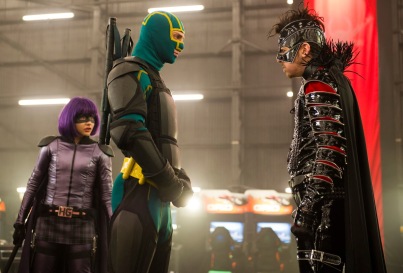 Kick ass VS The MotherFucker

I loved this film. I actually liked it more than the first. The action was so over the top. I really enjoy the group dynamic of Justice Forever. Jim Carry really helps with the film. He is not his normal over the top self, who I actually do not think is funny.He is serious and just funny enough for the character he is portraying. I like the serious feel of the film. It is cool to see the heroes put in awful situations and still strive for good. I can not wait for kick ass three, I know it is coming I read the comic. I give Kick Ass two 4/5 stars. It is one of the best comic book adaptations and films I have seen to date. I will be picking it up for my personal collection. I hope everyone will feel the same as me.

Kingsman is the latest superhero comic book flick by director Matthew Vaughn. Kingsman is a British spy thriller that would best be described as Kickass meets James bond. The movie is based off of the comic book mini-series The Secret Service by Mark Millar, the same writer as previously released Vaughn flick Kick-Ass.

The KIngsman is a fast paced ride that does not end until the film credits are rolling. The fun with the film is that is pulls no punches and knows exactly what kind of film it is. KIngsman is fun,brutal, and unapologetic.

Eggsy is a poor “bloke” who is somewhat of a mischievous young adult. He is always in trouble and constantly running into problems with local gangs. He finds himself in a bit of trouble yet again only to be bailed out by a secret organization his father once worked for before dying in an act of heroism. He is mentored by Ghalahad who knew Eggsy’s father and ends up taking him under his wing. Eggsy is optioned with joining the group of elite spies by joining other candidates.

The film goes on with not much character development outside of Eggsy.  The characters are extremely fun and provide an extremely enjoyable show to watch. The mix of humor and action is another coup for viewers and fans of Vaughn’s previous works. Ghalahad played by Firth was a big hit on my end. I truly enjoyed him and his scenes, The fight scenes were where this movie truly shined. With a nice mix of conventional fight techniques mixed with parkour and a barrage  of unconventional weapons this is truly a way to make fights more enjoyable.

Overall Kingsman was a fun watch. A 7/10 and I would watch it again. If you are a fan of comic books films or violent fun action comedies check it out.