Eli Roth’s first big picture, that got him into the game of horror is a fun little flick.  All the classic genre tropes of horror are there teens, drugs, sex, and lots of killing! Basic premise of Cabin Fever is a group of young people go camping and find themselves attacked by unknown forces. Check this one out foe some good effects, laughs, and some genuinely great scenes by Eli Roth! 3/5 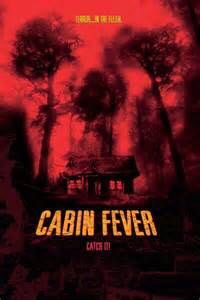 THe last exorcism is exactly how you dont make a horror sequel. this is also why people tend to disrespect and hate the sequels of horror films. This is a shame since the first was so fun and a fairly good movie. This film should be grea. It is produced by Eli Roth who is a horror phenom and cult god, the screen play was wrote by Damian Chezal who won an oscar for Whiplash last year, so why does this fail ?

The premise of this second installment of The Last Exorcism  picks up immitetly after the first where nell, the young girl possesed and impregnated by a demon in the first film. Nell is found in a families house acting crazy and degranged after escaping the cult. She is sent to a house for girls and seems to start doing better. She sees strange men in masks, a silver guy painted who creeps her out, and voices over the radio. This is about all the movie is. Nell going through New Orleans seeing shades of demons,ghosts, and cult members. It is a lazy attempt at horror and a qucick buck at the expense of the first  film. The ending is an abomination and just craps all ov er the original by having dumb cgi scares and turning  into a bad carrie remake.. My recomendation i sn ot to  watch this. I would give it a 3-10.