The Visit is M. NIght Shamylan’s latest trip into the horror genre. He has been on a decline over the last few years. The Visit has some high points and low points. Mostly average overall for me. I did enjoy the film quite a bit actually. The film is set in a rural Penn. town when two children go visit their grandparents whom they have never met. The mother is going away on a cruise and is estranged from her parents after a falling out. The weekend that ensues is one from a nightmare that the children will not soon forget.

The Visit is more of the same from M. Night. The film is much better than any movie he has made over the last few years. its his best movie since The Village. The twist was a bit predictable but not ion all fashions. It still had me surprised at the end of the film.

The stand out performance was Tyler, played by Ed Oxenbould. he was hilarious. He was a rapper and played the typical teenager. Over all it had scares, humor, and suspense all of what M. Night’s movies need. 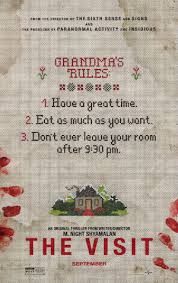