The Last Samurai is an engaging tale of war, love, and inner conflict starring Tom Cruise and Ken Watanabe. The film was directed by Edward Zwick. The Last Samurai takes place during the Meiji restoration of Japan during the late 1870’s. Japan is in a constant civil war type of struggle between the old ways of the samurai and the more modern westernization by the emperor.The conflict arises with the emperor, who wants to become more modern, brings in consultants from western countries, to train his men in culture,politics, and war.

Tom Cruise portrays captain Nathaniel Algren, a highly acclaimed soldier and now alcoholic.He is summoned by the emperor to Japan to train his army in the ways of guns and battle tactics. Algren brings with him firearms and cannons  to combat against the sword toting samurai.When the time comes Algren and his Japanese army are overwhelmed by the relentless attack of the samurai, who ruthlessly take Algren and his men by storm in combat. Algren manages to kill many samurai himself and even takes multiple down in sword combat. His life is spared when the leader of the samurai rebellion Katsumoto, played by Ken Watanabe, sees how strong a warrior he is and his determination.

Algren spends the winter with the warriors in their village, mastering the art of bushido and the sword. While he is there he makes close bonds with many of the residents and falls in love with the family of a samurai he downed in combat.With an impending war approaching, Algren and Katsumoto go to Japan on the request of the emperor to sort out the problems or face war.

The Last Samurai is not original, in any way, because it takes story elements from plenty of past films. It is, however, extremely captivating and a beauty in its own right.The movie is an instant samurai classic. Cruise starts off as an arrogant and selfish typical American. When he learns of the beauty and lifestyle of the samurai, he changes his ways.The movie is similar to great movies like Dances with Wolves and Broken Arrow. I love this movie! The fight scenes are beautifully choreographed, and the swordplay seems accurate and flawlessly executed. The last samurai is touching, exciting, and moving. The film is folded perfectly together like Japanese steel. It is nice to see the samurai stand tall and uphold their honor in the face of a cultural shift towards modernism.

I give The Last Samurai five stars because I could not get enough of it. The film is a personal favorite of mine; I think Tom Cruise just kills it. What can I say, I am a huge sucker for a good samurai flick. 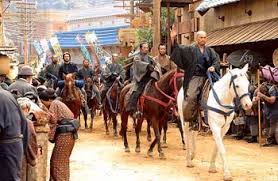